[Jones's planetarium work, Samskara, has played all over the world, from the Fiske Planetarium in Boulder to Burning Man, pictured here.]

When you go to visit Android Jones, a virtual reality artist and maker of pixelated visuals at Bassnectar and Tipper shows, you half expect him to live in a metal tank or a vat or a pod, with a USB outlet instead of a belly button.

In fact, you drive down a two-lane highway past cornfields and cow pastures, over a one-lane bridge, where Android works out of a barn with doors open to an apple orchard.

[The barn where Android Jones works, just outside his childhood home.]

Jones lives here, too, on this spot of land outside Lyons, Colorado, his family bought 43 years ago. Now, after living elsewhere for more than a decade, Jones is back on the land where he grew up.

[Android Jones in his studio.]

It's a good place to appreciate why fans of electronic music call him "the greatest artist on the friggin planet," and why digital art captures their analog souls.

"It was hard to find kids that thought the way that I did," says Jones. The nature was great. He tromped around the hills. He drew. "I spent a lot of time in my imagination."

[Jones's art is often called "visionary," but he prefers a word he made up himself, electro-mineral, meaning: someone who works with the electricity and minerals in computers and projectors.]

When he was 11, he suffered a venous anomaly in his brain. After surgery, he was hooked up to tubes and sensors and monitors. Sort of like an Android. He was left with a huge scar. He felt even more different from his peers and withdrew even further into his own mind and his own art.

In art school, Andrew was trained traditionally, but he decided computers were his canvases, while other artists fetishized paint and brushes. But why not use tech? he asked. Hadn't tech kept him alive during surgery? And didn't Michelangelo and Da Vinci use the highest tech they had? 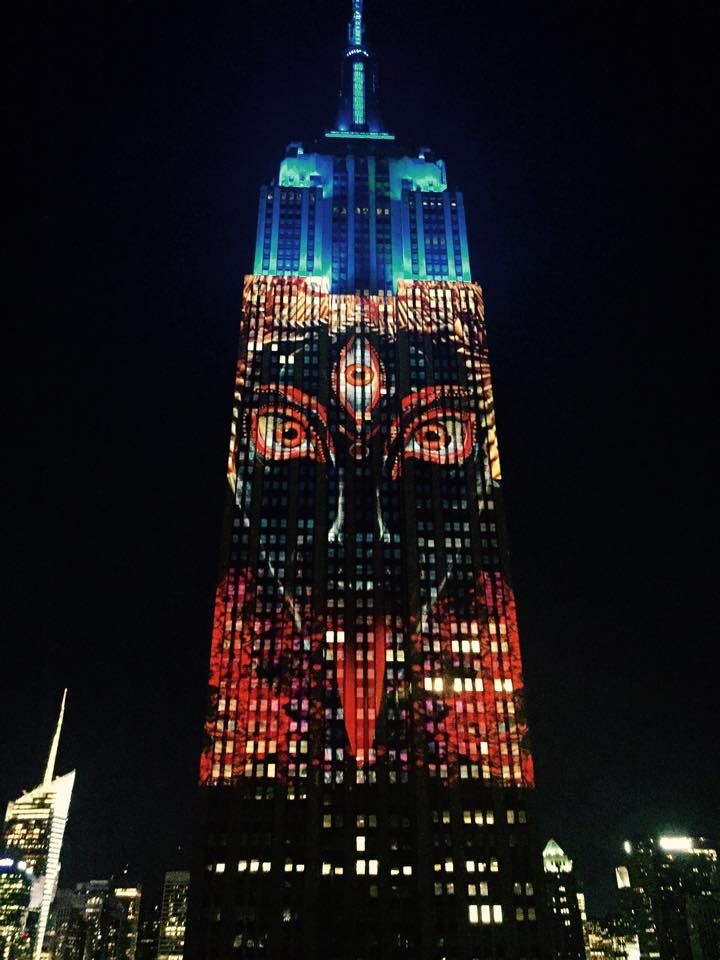 [Jones's art has been projected on the Sydney Opera House and, here, the Empire State Building.]

Digital art got Andrew jobs. He worked on Nintendo games — especially Metroid Prime — and on films. As he grew older, he started his own studio.

There's another thing that seems to have fueled his creativity. "I'm someone who really enjoys tools," Android says. His shop is filled with drills, lathes, soldering guns. "There are physical tools — and there are chemical tools."

Jones co-developed virtual reality called Microdose, soon to be released. It's tough to explain, but it's a sort of a flying, 3D, synthetic sculpture, like a microdose of a trip.

Microdose has spent the summer as part of an installation at the Smithsonian. A huge accomplishment.

His art has gone international. But Andrew didn't settle into SoHo or Williamsburg.

In 2013, Jones was living in the Bay Area when his dad died suddenly from a heart attack. Andrew bought a one-way plane ticket back home to Lyons, to take care of the land and his mom, who still lives here.

[Android's subjects tend toward the fantastical.]

The land in Lyons is full shanti — prayer flags, pictures of Hindu gods, a meditation room, a composting toilet — all right near the highest tech. Like, the computer he uses to mine cryptocurrency is right next to the wood-burning stove he uses to make his own charcoal for drawing. It's this combination of technology and the natural world — not either or — that's let him thrive.

Today, Jones's world is big. He lives half here on the farm, half on the road at festivals and art shows, and half in VR. If that's too many halves, it's because VR lets you be two places at once. Jones exercises in VR. "Goes" to raves in VR. Sessions in the Microdose VR can help drain the tension in his body and mind. That, and walking in the orchard.

[Android Jones on his porch, checking out the newest canvas from his prized pupil, his 18-month-old daughter Nova.]