Amazon booze deliveries and Amazonian hallucinogens: This is your News on Drugs

Amazon booze deliveries and Amazonian hallucinogens: This is your News on Drugs

Enjoy the news but seeing too many tracers to read it? We got you covered. Here are the most interesting and important developments in the world of drugs last week:

1. Cannabis has medicine in it, the FDA ruled, approving a CBD epilepsy drug. (The federal government, note, has long held that the cannabis plant has no accepted medical use. They can no longer honestly make that claim.)

3. Crazy drugs can make you sane, as Ayahuasca, the Amazonian brew that makes you see insane shit, has "rapid antidepressant effects" in even the saddest folks, a randomized placebo-controlled trial found.

4. Cannabis can be addictive, and some public health officials say pot dependency is a rising problem — although still nowhere as much as alcohol.

6. Futbol and drugs do mix, as the captain of the Mexican World Cup soccer team was accused by the U.S. government of helping launder cartel money. “Rafa” Marquez is still leading his team in Russia, but can't travel to the U.S. now.  Wager accordingly.

8. A police dog in chicago helped cops locate 1,500 pounds of weed in a back of a trailer.

9. Public opioid shame continues, as a gallery owner left a 10-foot heroin spoon outside the offices of Purdue Pharma. The company manufactured OxyContin and marketed the shit out of it. The gallery owner was arrested, but says more guerilla spoons are coming. Purdue is still worth billions. 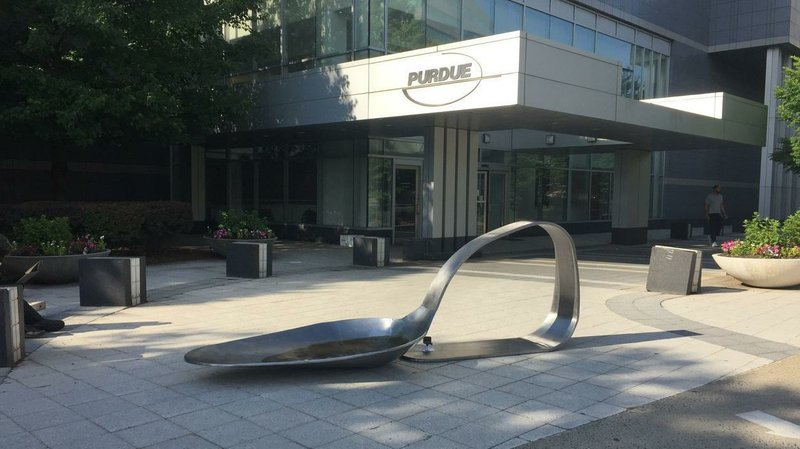 [The spoon outside Purdue Pharma HQ. Photo from AP.]

10. Snitches lose riches, as the life of "Permit Patty" is now ruined. The San Francisco woman was Twitter-mobbed after she pretended to call the cops on an 8-year-old girl who was selling water loudly outside the "Patty's" window. "Patty" loudly pretended to rat out the girl for not having a permit. Turned out, the rat fink dickhead hypocrite "Patty" was the head of a cannabis company, an industry that is not exactly permitted at every level of the government. The backlash was tsunami-ish, and the woman is no longer CEO of her weed company, and she was blackballed by pot conferences and websites.

11. BIG3, a professional 3-on-3 basketball league, approves CBD for its players. All other pro sports leagues still ban it. That may change. CBD is, remember, a medicine now.