Right now, Disney/Marvel’s Black Panther is sitting comfortably at #1 for the fifth week in a row, something that hasn’t happened since 2009’s Avatar and 1999’s The Sixth Sense before that. Clearly, it’s striking a cultural nerve — writers everywhere musing about its implications on race, feminism and superhero films in general. Yet as far as can be seen, none have written about its explicit references to “healer” plants like ayahuasca.

The story of Black Panther begins with a background story of fictional African city Wakanda, described later as the “real El Dorado.” Legend maintains that at the city’s foundation, five warring tribes were united when a leader was visited by the Panther God, whose spirit guided him to consume the “Heart-Shaped Herb.” Through a vision quest, the leader was granted extraordinary powers of strength, stealth and intuition, and was deemed the first “Black Panther” — King of Wakanda.

Each ensuing Black Panther received the Heart-Shaped Herb prior to assuming the throne.

The film depicts elderly women cultivating and maintaining the glowing Heart-Shaped Herb with reverence and humility. In ritual fashion, they smash it into a liquid as the new king T’Challa (Chadwick Boseman) is laid on a bed of red sand. Zuri, a facepaint-wearing, staff-wielding high priest (Forest Whitaker) calls upon the “ancestral plane,” and as the king chokes down the deep purple liquid, the women cover his quivering, fearful body with sand until he is buried head to toe. The king then experiences visions both terrifying and beautiful, where he encounters deep and profound fears before emerging from the sandy grave “reborn” as Black Panther. 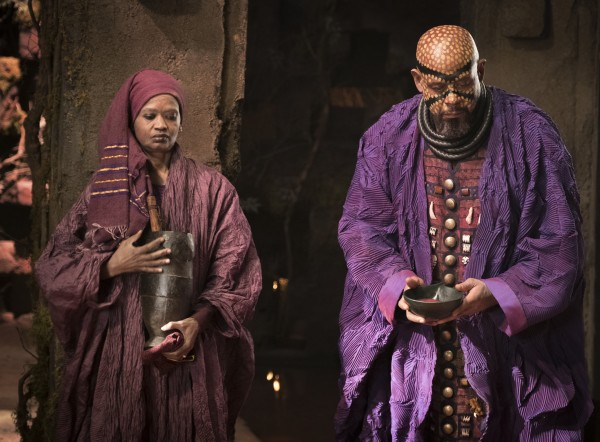 Ayahuasca, known as “vine of the soul,” is a brew from the Amazon that takes people on inner journeys. It's made from combining the Banisteriopsis caapi vine with the chacruna leaf into a ritual brew. Chacruna contains large amounts of DMT, yet if consumed in isolation, digestive enzymes negate the DMT’s effects. The vine acts as an MAO inhibitor, a sort of barrier around the chacruna, thus allowing DMT to enter the bloodstream and brain and induce an extended “trip” through intensely vivid, often life-altering imagery.

Many wonder how Amazonian natives could have possibly known to combine the two plants which, on the surface, have no causal link. Legend maintains people didn't discover the connection on their own. Rather, they were guided to it by otherworldly beings who descended into the jungle to bear the “magical drink” that would “connect them with the radiant powers of the heavens.” Though no one knows for certain how long the brew has been consumed by Amazonian tribes, there’s speculation its use goes back over 2,000 years, with other estimations reaching to 5,000 years.

People speak of ayahuasca — often called a “medicine” or “remedy” — in the feminine, claiming it connects them to the “Divine Mother” who has come to heal them of their deepest illnesses. This healing often comes through harsh confrontation with the shadow self, where practitioners are forced to relive traumatic moments, face repressed truths, and/or experience their deepest fears as reality, including death itself. This letting-go often comes through violent “purging” in the form of vomit, diarrhea, or both at the same time.

Nevertheless, many maintain the experience heals them of afflictions no Western medication can appease. Reports abound of ayahuasca curing people of depression, anxiety, PTSD, and addiction. Many claim it connects them to “heavenly realms” and entities of other dimensions. In spite of the discomfort it causes, people continually return because it helps lead them to their best self, their (pardon the cheesiness) inner superhero.

T’Challa drinks the Heart-Shaped Herb twice. Each time, he is brought to an intermediary, heavenly realm between life and death. Before arriving there, however, he relives the trauma of witnessing the murder of his father, his idol, a death he feels he should have prevented. When T’Challa reawakens, bursting forth from the red sand, he is breathless, confused, terrified. Forest Whitaker and the women who protect the herb calm him, and when he returns fully to the physical plane, he’s stronger, more in control of his deepest fears, reborn as the Black Panther.

But then new fears arise. He learns terrible truths about his father’s past, truths that arrive in the form of Erik Killmonger (Michael B. Jordan), who challenges T’Challa for the throne. Killmonger is fearless and powerful, and T’Challa, weak and fearful from the recognition of his father’s lies, is defeated, thrown over a waterfall and presumed dead. But he clings to life in a comatose state, and his mother (Angela Bassett) gives him the Heart-Shaped Herb once more. Through a vision on the astral plane in which he faces his deepest fear — namely, his father’s lie, and by extension the faulty foundation of his entire identity — T’Challa rises above his hardships, overcomes his ailment, and reawakens as the fearless king he has always been capable of becoming.

I, too, felt tremendous fear when I drank ayahuasca in the summer of 2017. I realized the stories were true: I felt myself dying. Reality itself became my worst nightmare, a hellish environment of suffering where demons threatened all I ever knew to be true. My sense of identity was crumbling. Like T’Challa’s second vision, I was experiencing “ego death,” and I rushed in terror to purge in a bucket. Sensing my fear, one of our Colombian guides came to my aid. He knelt beside me like a beacon of light amidst the darkness, and in this foreign realm where I felt myself in the belly of a vast organism of ambiguous intent, this man showed me that I had a choice. I could resist the fear, energizing it through conflict as I have unconsciously my entire life. Or I could accept it, face it, and stand up. I could dig deeper than I ever knew possible, find an enduring source of light within, and trust that a higher source of wisdom was guiding me to become the man I was capable of being.

I chose the latter. I returned to my mattress, laid down, closed my eyes, and traveled through unfolding visions of familial trauma, had nonverbal conversations with beings both angelic and demonic, and ultimately followed a soft feminine voice through the powerful music the curanderos provided. Slowly, the fear dissipated. The voice called my heart onward in strength. In the trial’s wake, I felt a lightness I’d never known, a power and humility sourced deep within. Never before had I felt more of a duty to cultivate my abilities to affect the world with positive change. I felt called to become a fearless servant for something beyond my comprehension, something beyond my struggle-filled ego, something intent upon healing the suffering planet.

Yet still I feel fear at the thought of returning to that realm. I imagine T’Challa did, too. Overcoming fear is an ongoing journey. But the recognition of fear’s presence indicates the necessity of its overcoming. Only in overcoming it through the Heart-Shaped Herb could T’Challa become the hero he always could be — not a replica of his father, but himself, King of Wakanda, the Black Panther.

The connections between Black Panther and ayahuasca continue. Panthers aren’t actually a specific species but rather refer to the melanistic color variant (aka black pigment) of any large cat. The two most common panthers are leopards and jaguars, and jaguars — especially black ones — are highly revered in Amazonian ayahuasca lore, seen as a shamanic ally, both spirit and animal, known to visit ritual participants in the profoundest depths of their visions. Their appearance signifies power, stealth and fearlessness, qualities of the Black Panther.

Perhaps creator Stan Lee or writer/director Ryan Coogler have experienced the “remedy” in some form, for ayahuasca is but one of many such plant medicines — in fact, it might be more accurate to surmise that Iboga was the film’s influence, given its presence in Africa. Then again, according to high-dose psilocybin advocate Kilindi Iyi, if we go back to the times of Pangaea, the lands of Africa and South America were the same body and thus share many of the same plants. (Iyi confidently suggests if he were to search the African rainforest, he would find ayahuasca plants.) All these parallels are ultimately allegorical, but the connections are too explicit to deny.

Is Disney leading people toward sacred, ritualistic brews capable of unlocking their true self? Or are they reflecting a shifting cultural mentality around these plants: namely, that there is something profound about ancient tribal wisdom, and our inherited, socialized Judeo-Christian morality isn’t sufficiently feeding the search for an inner divine? Who knows. Regardless, the Black Panther lives, and his journey will continue teaching us for many years to come.

[all images via Marvel Studios]