Why hitchhiking needs a comeback after being vilified by the U.S. gov't to sell cars

Why hitchhiking needs a comeback after being vilified by the U.S. gov't to sell cars

Whenever I'm driving by myself, and it's reasonable to do so, I pick up hitchhikers.

The characters I meet tend to fall into one of two categories:

Fresh-Eyed Youngster Out to See the World.

Actual quote: "On my way to my summer job categorizing lichens in the National Parks, wanted to meet nice folks!"

Grizzled Oldster Straggling Toward His Next Mistake.

Actual quote: "The prison only gave me $45, barely enough to get to Junction. You don't know how to sue ex-landlords, do you?"

Youngsters rejuvenate me. Oldsters teach me what not to do.

I have never murdered any of them.

Nowadays, I have fewer opportunities to pick up thumbers. They've thinned out. Because the country is richer and more people can afford cars; and because hitchers are scared off by the general sense that car hopping is a good way to get diddled by somebody you don't want to diddle you.

Elijah Wald thinks that's a shame. As one of the world's foremost experts on hitchhiking — there aren't many — Wald says hitchhiking is great. He's traveled the world on almost no money, followed Woody Guthrie and Jack London and Jack Kerouac — and he wrote a really good book about it called "Riding with Strangers: A Hitchhiker's Journey."

"We have a completely wrong view of hitchhiking," Wald tells Rooster Magazine.

The people who actually give rides are nice and friendly, Wald says. The driver and passenger connect. "You have short periods of incredible intimacy," he continues. "They tell you things that they would never tell their nearest and dearest." 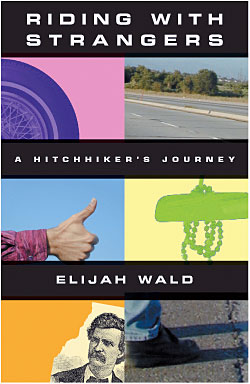 Plus, hitchhiking is actually easier and safer than at any time in the last 50 years. Not only is there less crime in America generally than at any time in generations, it's also easy to use technology to stay safe, to text the license plate of the car you're in to a friend, or let them track your location.

Wald thinks hitchhiking won't just save gas — it could nudge us back toward sanity.

Americans get stuck in tiny worlds of their own creation, a series of boxes — house, car, office, gym, house — eyes on screens the whole time. Hitchhiking kicks a person out of their cage.

"It's opening up to the world," Wald says of getting out there.

Hitchhiking was once as common as the Greyhound. Farmworkers went from field to field. In movies, and real life, hot chicas lifted their skirts above their ankles and caught an instant ride. Sports Illustrated even published a positive article about hitchhiking in 1966, full of actual experiences from real people who loved doing it.

After the Sixties, though, hitchhiking in America was shot. 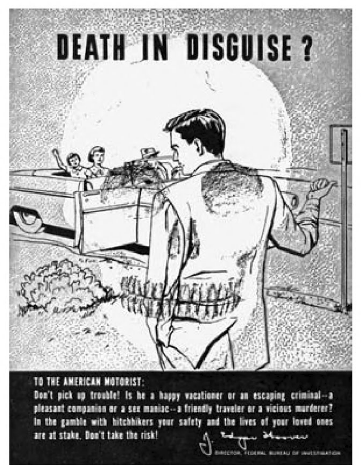 Women especially got scared away. Reader's Digest wrote in 1973, absurdly, “In the case of a girl who hitchhikes, the odds against her reaching her destination unmolested are today literally no better than if she played Russian Roulette.” Police officers in 1971 handed out cards to hitchhiking women that read, “If I were a rapist, you’d be in trouble.”

Hitchhiking did have dangers, but authorities and the media were mostly trying to terrify folks and sell cars because that's the business model. And it worked.

If it were up to Wald, young Americans would be forced to hitchhike, he says, half joking: see what's out there, who's out there. Learn that while the world is a minefield of broken hearts and bad decisions, it's not as physically scary as you'd think.

Hitchhiking teaches you not to judge.

"I've been picked up by neo-Nazis," Wald says. "Which tells you is that there are neo-Nazis who pick up hitchhikers while nice liberals drive right past you in the rain."

Is Wald's message over-optimistic? Possibly. I'm all about Couchsurfing and the sharing economy and the kindness of strangers, but the one time I tried to hitch across my state was rough: rode with a meth-head drug smuggler, failed to make it home, had to sleep by a river. In Avon, Colorado, a cop literally chased me out of town. I'm not clear how you can outlaw standing and putting your thumb out, but the Vail Valley (and many other places in the U.S.) managed.

On the other hand: I used to hitchhike short distances when I lived in the mountains, almost always with my kayak. I'd park, put in, ride the rapids, take out, stand by the side of the road, and within a few minutes somebody with a truck would let me throw the kayak in the bed and carry me back upriver to my car. They were always friendly; stoked to be helping a bro out. And I've hitchhiked with more success in South America, the Middle East and Asia. These are some of my favorite memories. I felt free.

Hitchhiking is the optimist's Lyft, the pro-social Uber.

It's a storied American tradition, one I wish would come back.