Provocateur extraordinaire, assassination attempt survivor and champion of the first amendment, Larry Flynt — also known as the infamous owner of Hustler Magazine — hung a full page ad in the Washington Post last Sunday reminiscent of a wild west wanted poster. It was a request for any information on impeachable offenses perpetrated by a president who is apparently so disturbing that a man who’s dealt in smut and controversy his whole life is willing to offer a $10 million bounty.

The ad cites six reasons Trump should be impeached including obstructing justice by firing former FBI director James Comey, defending racists after the Charlottesville riots, engaging in “gross nepotism” and pulling out of the Paris climate accords. He even went as far as to say that Trump, or “the most powerful moron in history,” might lead us into a nuclear war. 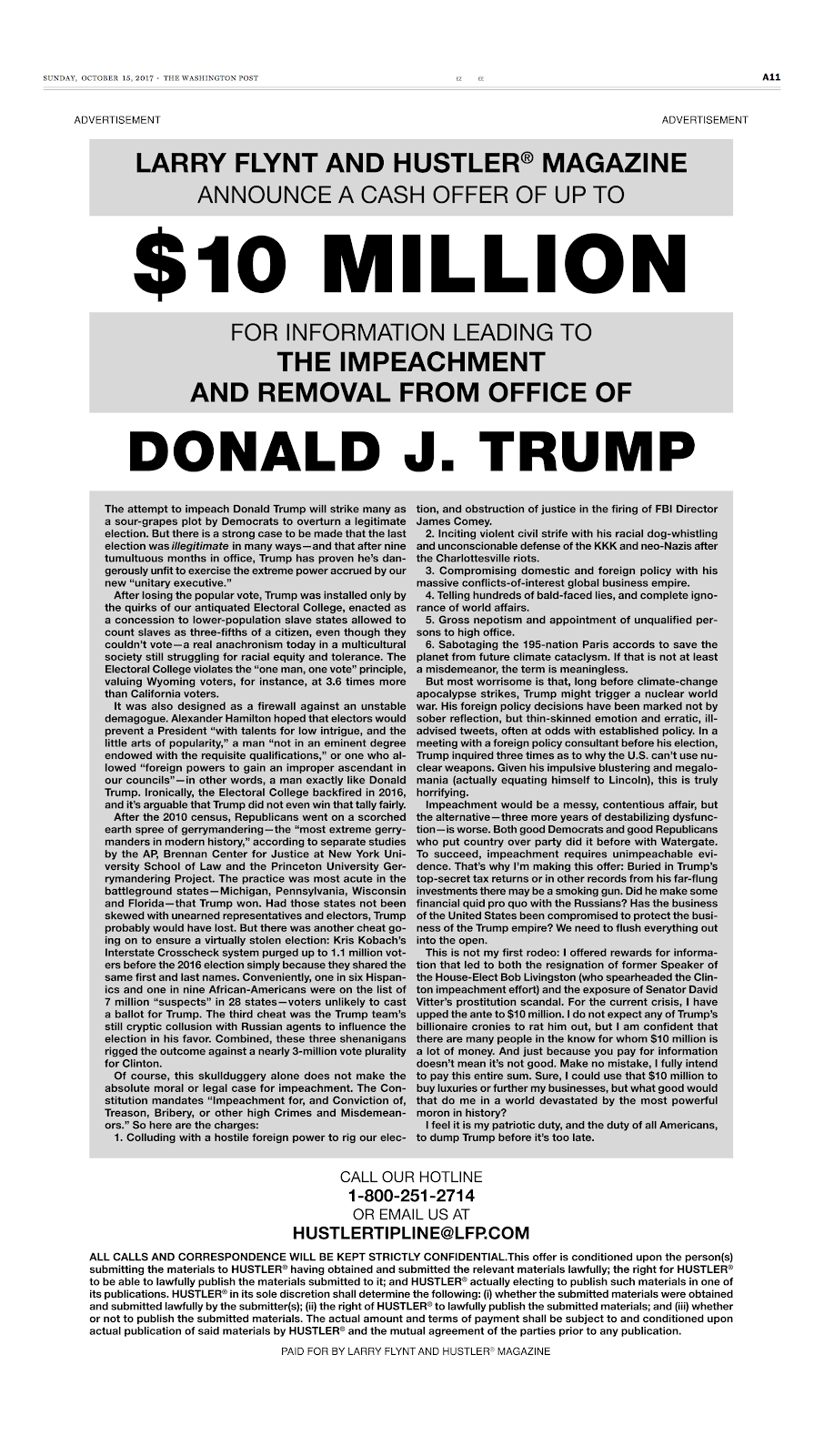 “Impeachment would be a messy, contentious affair,” Flynt writes, “but the alternative — three more years of destabilizing dysfunction — is worse. . . I feel it is my patriotic duty, and the duty of all Americans, to dump Trump before it’s too late.”

Flynt has a long history of injecting himself into politics — granted in sensational ways.

For example, in 2012 he offered $1 million in a similar full-page ad for information on Mitt Romney’s tax returns. That same year, Flynt printed another one offering Todd Akin a million for proof of his claims of “legitimate rape.”

Another million was offered to Richard Mourdock in response to the senator’s comment that “even if life begins in that horrible situation of rape, that it is something that God intended to happen.” In this case, Flynt requested proof of god relaying this to Mourdock in the form of “letters, e-mail, text messages or videos.”

In 2007 Flynt, absent a specific target took out another ad in the Washington Post that asked,  “Have you had a sexual encounter with a current member of the United States Congress or a high-ranking government official?” Again, the bounty was $1 million and it caught David Vitter in its net for his apparent predilection for prostitutes and a rumored diaper fetish.

Years earlier in 1998 he pulled the same stunt in the heat of President Clinton’s Monica Lewinsky scandal and offered up yet another million. Soon after, GOP congressmen and would-have-been-speaker, Bob Livingston, was exposed as an adulterer and resigned as a result.

Now you might argue, and correctly so, that these are limpid publicity stunts. But this ad seems strikingly different. To be sure it’s still a stunt but unlike past examples, this ad lacks any air of comedy and unlike most, it's not meant to merely reveal a party's hypocrisy or humiliate a politician. It's intended to remove one he sees as a legitimate threat to Democracy.

Aside from that, he’s significantly upped the ante regarding recompense and it seems he means business. Unfortunately, the likelihood that someone will excavate a severe misdeed from Trump's sheisty past is poor at best. And there are a couple reasons for that.

Consider the people Trump deals with; most are exceptionally wealthy and while $10 million is substantial for anyone, to these people it's simply not worth alienating and angering a vengeful president and prospective ally. And Flynt seems to understand as much, even admitting in his ad, “I do not expect any of Trump's billionaire cronies to rat him out, but I am confident that there are many people in the know for whom $10 million is a lot of money.”

That last part is likely true. But how much more likely is it that the concoction of non-disclosure agreements (which Trump has employed throughout his career) mixed with fear will enforce the muzzle that’s kept them silent for so long?

The ad also panders heavily to the left, leaving it unclear how well received it will be by conservatives who might otherwise submit telling tales of Trump.

Still, who knows? Maybe somewhere there’s a lowly intern whose desk or email folder hides a damning piece of data that might help dethrone Trump.

But will that info be any more deserving of impeachment than firing the FBI director over his investigation into Russian collusion, which Trump openly admitted to on national television?  Could it be more vile than the Access Hollywood tape?

Let’s play devil's advocate and assume it will. There’s still the issue of impeachment proceedings which is voted on and handled by the House and Senate.

Problem is, Republicans control both bodies and Trump’s popularity is still relatively strong in red states. So maybe it's not so gasp-worthy that none of the outlandish actions he’s taken have prompted Congress to act. Even suggesting impeachment would likely draw the ire of their base and cause a revolt leading to a slew of congressional Republicans being ousted next cycle.

In other words, any information Flynt receives short of irreparably tarnishing the image of the GOP or unforgivable felonious behavior would likely become just another tally mark in a long line of scandals that have so far rolled off this president like water off an oiled windbreaker.

That said, plenty of experts theorize that Democrats might take back the House in the 2018 midterms and perhaps that’s what Flynt’s waiting for.

So, if you have information on Donald Trump and would like to be the beneficiary of $10 million you can call Hustler's toll-free number 1-800-251-2714 or email them at HUSTLERTIPLINE@LFP.COM.