GREENFIELD, Mass. (AP) — Four inmates sit silently in the library of the Franklin County House of Correction one summer morning. But these men aren’t here to read books.

Under the supervision of a nurse and two corrections officers, they’re taking their daily dose of buprenorphine. The drug, often known by the brand name Suboxone, is meant to control their heroin cravings and is commonly smuggled into jails and prisons. 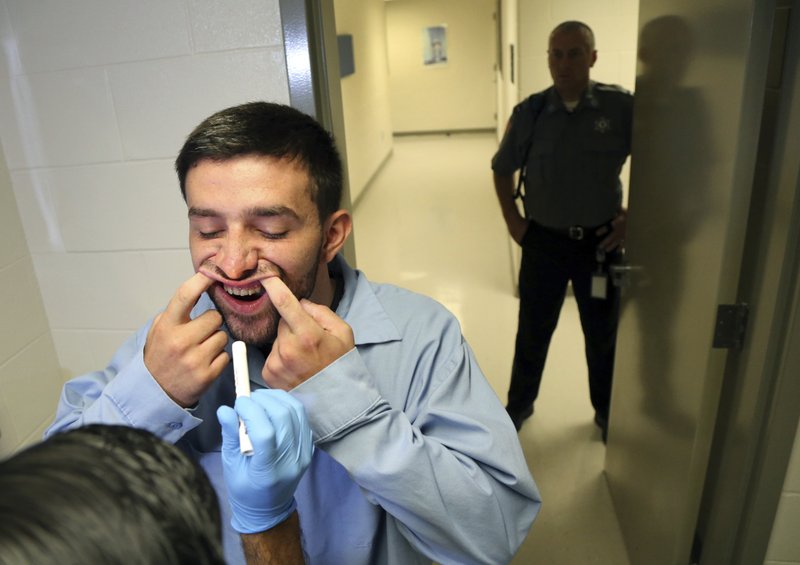 [Inmate George Ballentine opens his mouth for search after receiving his daily dose of buprenorphine, a drug which controls heroin and opioid cravings, at the Franklin County Jail in Greenfield, Mass.]

“Suboxone for me is literally a Band-Aid,” said inmate George Ballentine, 26, after he completes the carefully regulated ritual that includes crushing up the medication, placing it under the tongue to dissolve for 15 minutes, rinsing and then spitting into a sink. “When you get a cut, what do you do? You put a Band-Aid on until it heals enough to take it off.”

Scenes like this could be the future at more jails and prisons, as resistance from corrections officials long skeptical of the efficacy and high cost of administering opioid addiction medications appears to be loosening.

About 290 are offering a relatively new monthly injection of naltrexone known as Vivitrol to inmates shortly before they’re released, with many using free samples of the roughly $1,000 injection provided by drugmaker Alkermes, a company spokesman said.

Only about 30 facilities widely offer the two other more proven federally approved medications for opioid addiction treatment — methadone and buprenorphine — but those numbers are growing, said Andrew Klein, a criminal justice analyst who has been tracking the programs. 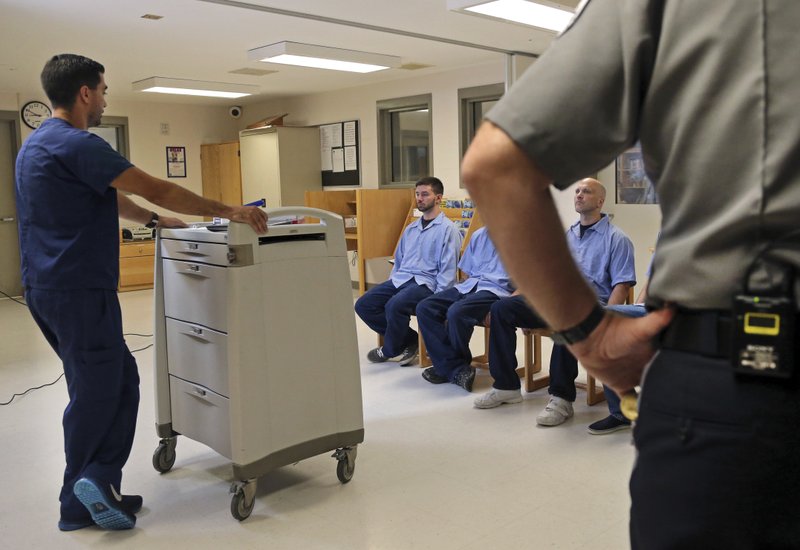 [Several Franklin County Jail inmates seated at right are watched by nurse Brian Toia, left, and a corrections officer after they received their daily doses of buprenorphine, a drug which controls heroin and opioid cravings.]

Franklin County, where 40 percent of its 220 inmates say they’ve used heroin, is so far the only correctional facility in Massachusetts widely offering buprenorphine. But state lawmakers this week approved legislation requiring medication-assisted opioid treatment at certain jails and prisons.

Neighboring Rhode Island and Vermont are already offering all three opioid addiction medications across its jails and prisons while Connecticut, which provides methadone at five of its facilities, is weighing a similar expansion, as is New York .

And Los Angeles County, with one of the world’s largest jail systems, is also preparing to widely offer buprenorphine and methadone.

“Jails are really America’s ground zero for the opioid crisis,” said Ed Hayes, an assistant superintendent at the Franklin County Sheriff’s Office, which oversees the jail. “It’s the perfect opportunity to make a public health intervention.”

Corrections officials have been slow to embrace addiction medications because many view them as simply substituting reliance on one drug for another. They also want the federal government to reimburse facilities for the costs. 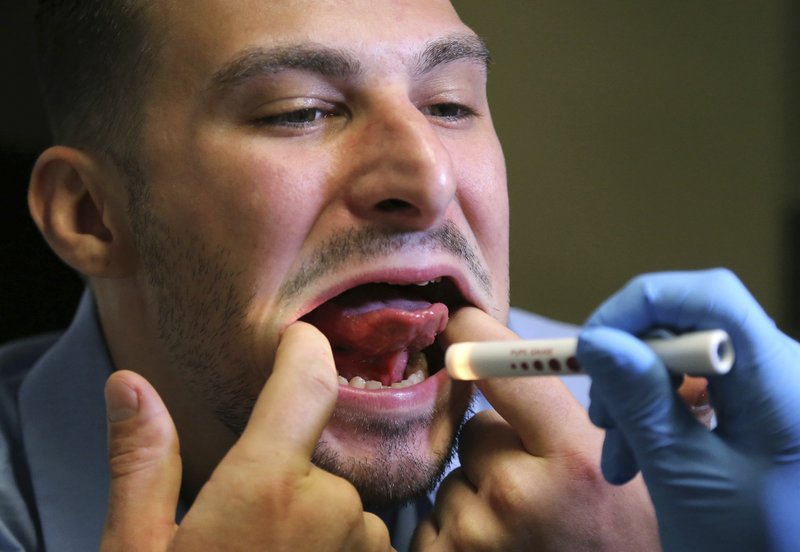 [Inmate Shawn Coleman opens his mouth for search after receiving his daily dose of buprenorphine, a drug which controls heroin and opioid cravings, at the Franklin County Jail in Greenfield, Mass.]

But reluctance is starting to fade with newer medications and more scientific evidence, said Elizabeth Gondles, of the American Correctional Association, a trade organization that accredits jails and prisons.

“We understand this is a public health crisis,” she said. “We know what we need to do. We just need the resources.”

The legal system could also end up forcing the industry’s hand. The American Civil Liberties Union recently sued correctional institutions in Maine and Washington state, arguing they’re violating the Americans with Disabilities Act by not providing the medications, and the U.S. Department of Justice has been investigating Massachusetts along similar lines.

Since introducing buprenorphine two years ago, the Franklin County jail has treated roughly 240 inmates at a cost of about $12,500 per inmate per year.

Sheriff Christopher Donelan notes that the county saw a 35 percent drop in opioid overdose deaths from 2016 to last year and suspects the jail program may be at least partly behind it. He is seeking funding for a formal study.

Proponents note there’s years of research supporting the approach, including an April study that found Rhode Island’s corrections program contributed to a 12 percent reduction in the state’s fatal overdoses in the first half of 2017 compared with the same period in 2016.

Much of Franklin County’s costs are for staff critical to the program’s success, including those screening incoming inmates and others providing behavioral health counselling and post-release case management, said Hayes, the assistant superintendent.

“This is not a magic pill,” he said. “It works only when these other elements are in place.” 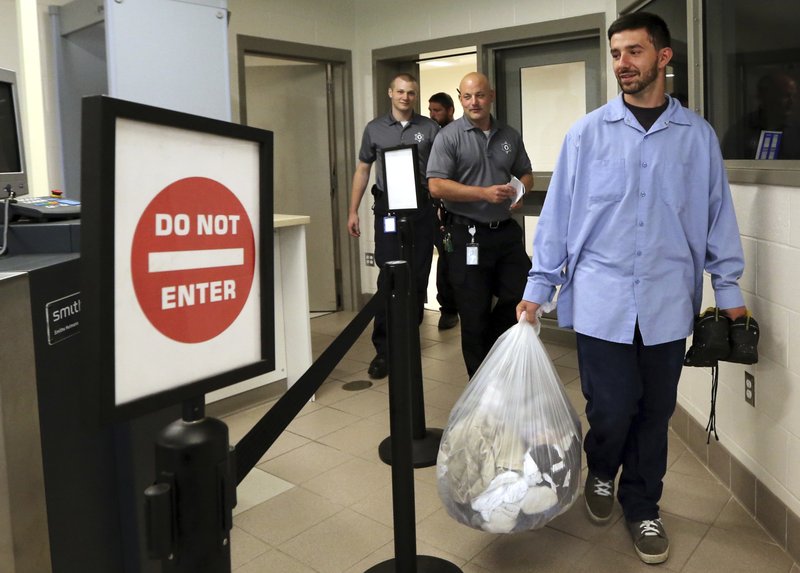 For Ballentine, the Franklin County inmate released soon after taking his daily medication last week, that personal attention was critical.

He had been hospitalized for three overdoses in as many months before his arrest for violating a restraining order and had every intention of using heroin once he got out of jail.

“The staff here decided not to give up on me even when I decided that I wasn’t worth it,” Ballentine said shortly before being released following his nine-month stint.

With his re-entry case worker at his side, Ballentine immediately checked in with his parole officer, picked up his buprenorphine prescription at a pharmacy and settled into a halfway home near the jail.

A week later, he reports his doctor hopes to soon take him off the medication he’d been on for about two months in jail. 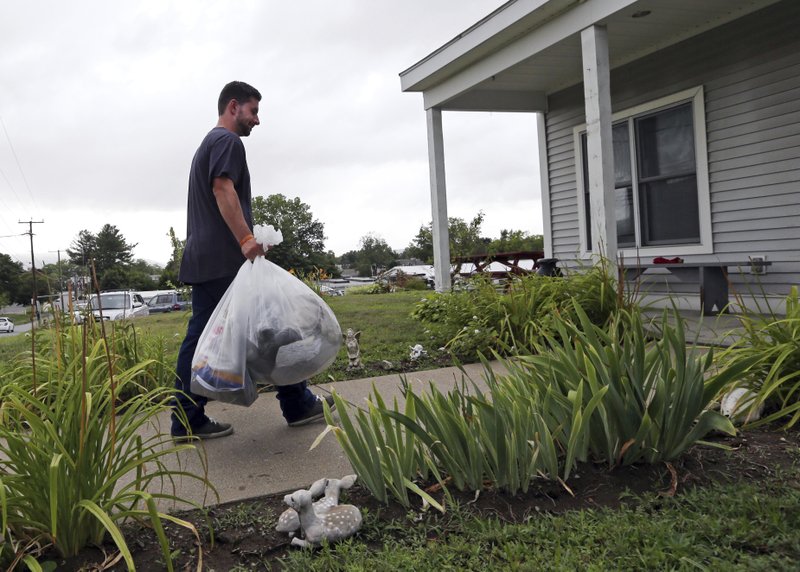 [Newly-released inmate George Ballentine walks into a halfway house where he plans to live for the next year in Greenfield, Mass.]

“I feel like I’m ready for it,” Ballentine said, citing volunteer work at a soup kitchen and other activities with others in recovery. “I’ve got backup plan after backup plan. I know it’s no guarantee of success, but I’m doing everything possible.”—PHILIP MARCELO, AP