Driving stoned is not the same as driving drunk, but it carries the same penalties. Until recently, though, there hasn’t really been a way for police to test a driver’s “marijuana intoxication” level.

Sure, cops in legal states have the power to give a cannabis DUI. They just also lacked the technology to test for it. A suspect would have to be taken to the station, processed and then they would have to get a blood test done. By which time, the THC levels in their blood have usually diminished and they get released.

Until now, they had no way to prove how high someone was when they were pulled over. Unlike alcohol, THC molecules on a person’s breath are extremely small and hard to measure.

That is all about to change, however. Since the medical and recreational legalization movement began sweeping the nation, startup companies have been engaged in a race to create the perfect weed-breathalyzer — one that actually works. And apparently, more than one company is very, very close.

Earlier in 2019, Hound Labs revealed a major $30 million injection into their “dual alcohol and marijuana breathalyzer” project. To push this brethalyzer product into factory production and distribution. 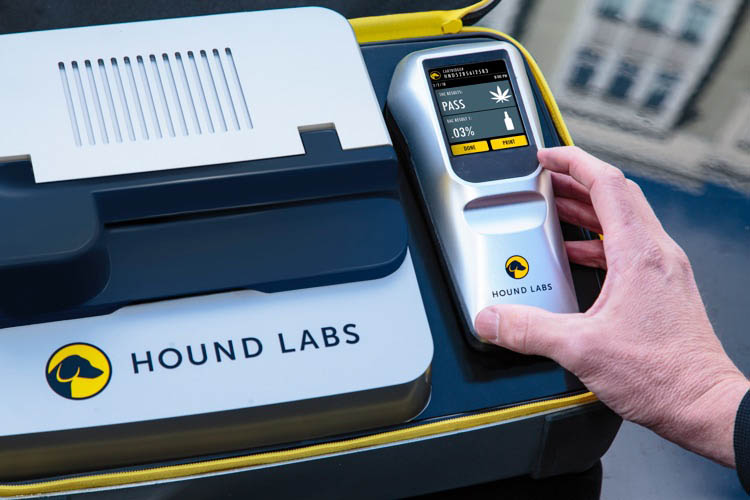 Hound Labs isn’t the only one who seems to have a viable product here, either. Engineers from the University of Pittspurgh also revealed a new form of THC breathalyzer that uses high-tech carbon nanotubes to detect THC levels from breath samples.

Which means, the golden days of being able to drive, joint in hand, lightly baked, down the road, window down, sunshine on your face and wind in your hair, are soon coming to an end.

(Not that that was ever legal.)

According to Hound Labs, this breathalyzer will allow police to detect even minute amounts of THC on a person’s breath — as little as one trillionth of a gram (per picogram) per liter of breath. So, even if you smoked an hour prior to getting behind the wheel, even if your tolerance is legendary and you haven’t actually felt stoned in years, if you get pulled over and blow into one of these things, chances are, you’re about to get arrested and charged with a DUI.

Which is serious business. In Colorado a regular DUI can cost a person between $6,541 and $7,201, not to even mention all of the penalties that come with that (ie probation, loss of license, driving classes, sobriety classes, etc.).

Hound Labs, naturally is very excited about all this. They are confident this cannabis breathalyzer is their ticket to big government contracts around the US. BIG bucks, in other words.

“With the publication of clinical study results validating breath as the new frontier for testing recent use of THC, investors can see the tremendous value that Hound Labs will bring to the market with its first-of-its-kind technology,” the company’s CEO Mike Lynn said in a recent statement. “We are excited to usher in a new era of more meaningful and fair drug testing now that marijuana is both medically and recreationally available to so many people.”

That’s swell. But the problem is, cannabis does not affect any two people the same way. It depends heavily on your tolerance, what kind of cannabis you consumed, how you consumed it, what your mental state is like, how often you drive after smoking and a whole host of other factors that make big differences in people’s ability to drive stoned.

And anyway, who’s to say that this breathalyzer can correctly correlate a THC breath measurement to intoxication. Being able to sense THC molecules on the breath is one thing, but being able to accurately determine how high someone is, is another entirely.

Some people might scoff at these arguments. “What’s the difference between driving drunk and driving stoned?” They’ll ask, with judgement in their eyes. “The same arguments could be made for alcohol: tolerance, experience driving drunk, mindset… The problem isn’t how well a person can drive stoned (or drunk for that matter), it’s that they’re putting others at risk by doing so.”

That’s reasonable. But then why is it legal to smoke cigarettes and vaporizers while you’re driving? Why is it alright to slam a six pack of GoFast energy drinks and get behind the wheel? Why can’t you be charged with “Driving Under the Influence” of those drugs? If we’re going to be slinging $7,000 penalties at people, we should probably be consistent about it.

None of the answers to any of those questions changes the fact that the marijuana breathalyzer is coming and they will likely be in the hands of our brave men and women in blue very soon. It will not be long before a cannabis blow is a routine part of a Colorado traffic stop.

Hopefully the punishment is adjusted to fit the crime in the meantime. But, I won’t hold my breath.