In roughly the last decade, America has seen a 5.7 percent increase in illicit drug use, according to the National Survey of Drug Use and Health.

We're in an epidemic, some say.

Surely, the uptick comes from those rascally teens and young adults who are always screwing up society, scoring darknet xans and copping heroin from under bridges. Yes, those amoral whippersnappers whose parents who never spanked them.

No, if you're looking for a huge driver of America's increasing drug usage, check the old folks homes.

Older adults — in their 50s and above — are part of the fastest-growing segment of drug users and abusers. The percentage using illicit drugs shot up 59 percent since 2004, from 30 percent to 44 percent.

(The government defines "illicit drug use" to mean any illegal drug or the "misuse" of a prescription drug.)

So grandpa may need to undergo random drug screening — which should be easy, since he pees 12 times a day. And have we checked under the mattress on Nana's electric bed for swag? And should we consider giving gramps a curfew: home right after dinner, 5:00 p.m.?

Younger adults still do more drugs than oldersters, by a lot. But their use is holding steady or declining, according to an analysis on DrugAbuse.com. 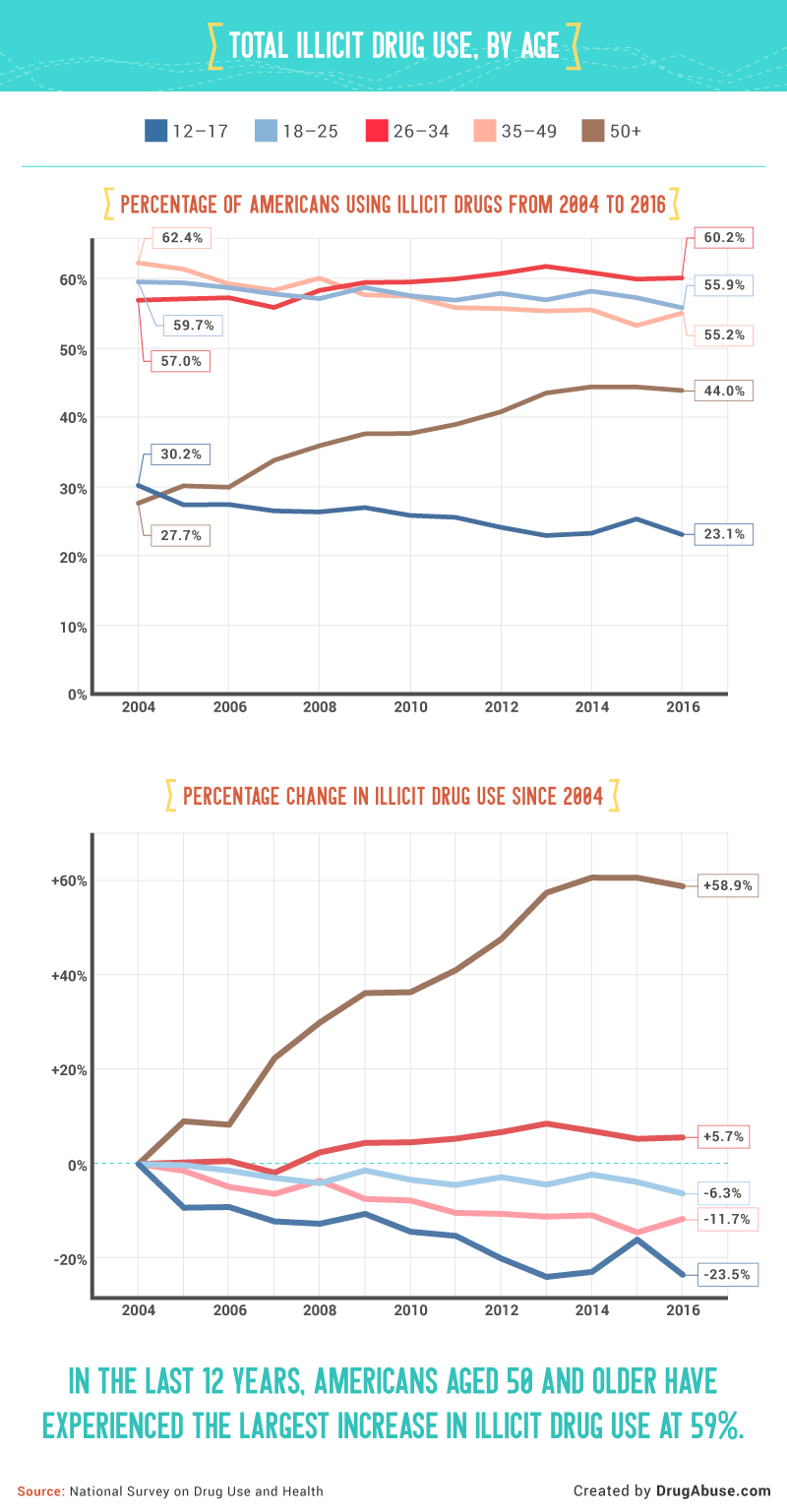 A closer look at older adults and their drug use reveals some surprising things.

Some of this illicit drug use is hard-core: toothless dudes using their gums to hold the tourniquet while they mainline China white heroin into paper-thin, varicose veins. The study found that crack cocaine, meth and heroin use is still tiny among oldsters, at less than .5 percent for each drug. But the use of each of these "hard" drugs is on the rise. Crack is used more than heroin or meth by oldsters, but meth use is rising most, according to the data.

Who's dealing to these old homies? And do they have spinny rims on their Rascal Scooters?

Some of the uptick in illicit drug use by older folks is because the number of dabbing grannies and edible-eating great aunts have doubled in the past decade or so, with 9 percent using cannabis.

But more of the increase in elder drugs is from drug dealers in white coats.

Yes, pills are the drug of choice for those whose whole lives now count as near death experiences. One in three medicare patients now has a script for a painkiller. Most of these are for legit pain. But the gray-hairs misuse the drugs a lot.

Have you been in the old folks homes these days? The cabinets have enough opioids, sleeping pills and muscle relaxants to fuel a whole Wolf of Wall Street scene.

To all this new information, there are two ways to respond:

Either way, if the DEA is going to be fair, it'll lay off drug raids in dorm rooms and Northern California grows, and use the battering ram to bash down the doors in South Florida assisted living homes. They'll never hear it coming.