Wu-Tang forever: a live review of RZA's The 36th Chamber of Shaolin performance

Wu-Tang forever: a live review of RZA's The 36th Chamber of Shaolin performance

About 20 minutes into RZA’s show on April 17 at Denver’s Paramount Theatre, an obnoxious drunk in the audience started screaming like he was at a football game. "Let’s GO!" was his contribution to the set. When he didn’t stop, people loudly replied with, "Shut the fuck up!"

Security took him away. He was escorted out yelling, "Fuck you, RZA!"

It was clear why the dude was pissed: he thought RZA was going to be MCing, dropping flow, bringin’ da ruckus. But this show wasn’t really about RZA. This show was about The 36th Chamber of Shaolin, the 1978 kung fu classic that inspired young Robert Fitzgerald Diggs to become RZA and bring about the Wu-Tang Clan.

RZA seemed unaffected by the bro. He stood like a shadow on the stage, dressed in black in the corner with companions Tom Shannon and DJ Skane. He moved subtly to the beats he laid down, beats he created through Wu-Tang’s history, arranged live with computers and who knows what else to uplift the film that inspired the Clan to be.

The 36th Chamber of Shaolin follows young Liu Yude’s (Gordon Liu) quest to become a kung fu master. The Manchu Government has oppressed (and in some cases killed) his family and friends, and Yude sees kung fu as the path to overcoming the tyranny. In lieu of a treacherous journey to the mountaintop, he becomes a student of the legendary Shaolin Temple, and only upon completing all 35 trials — known as the “35 Chambers” — can he claim, like Neo, to know kung fu. 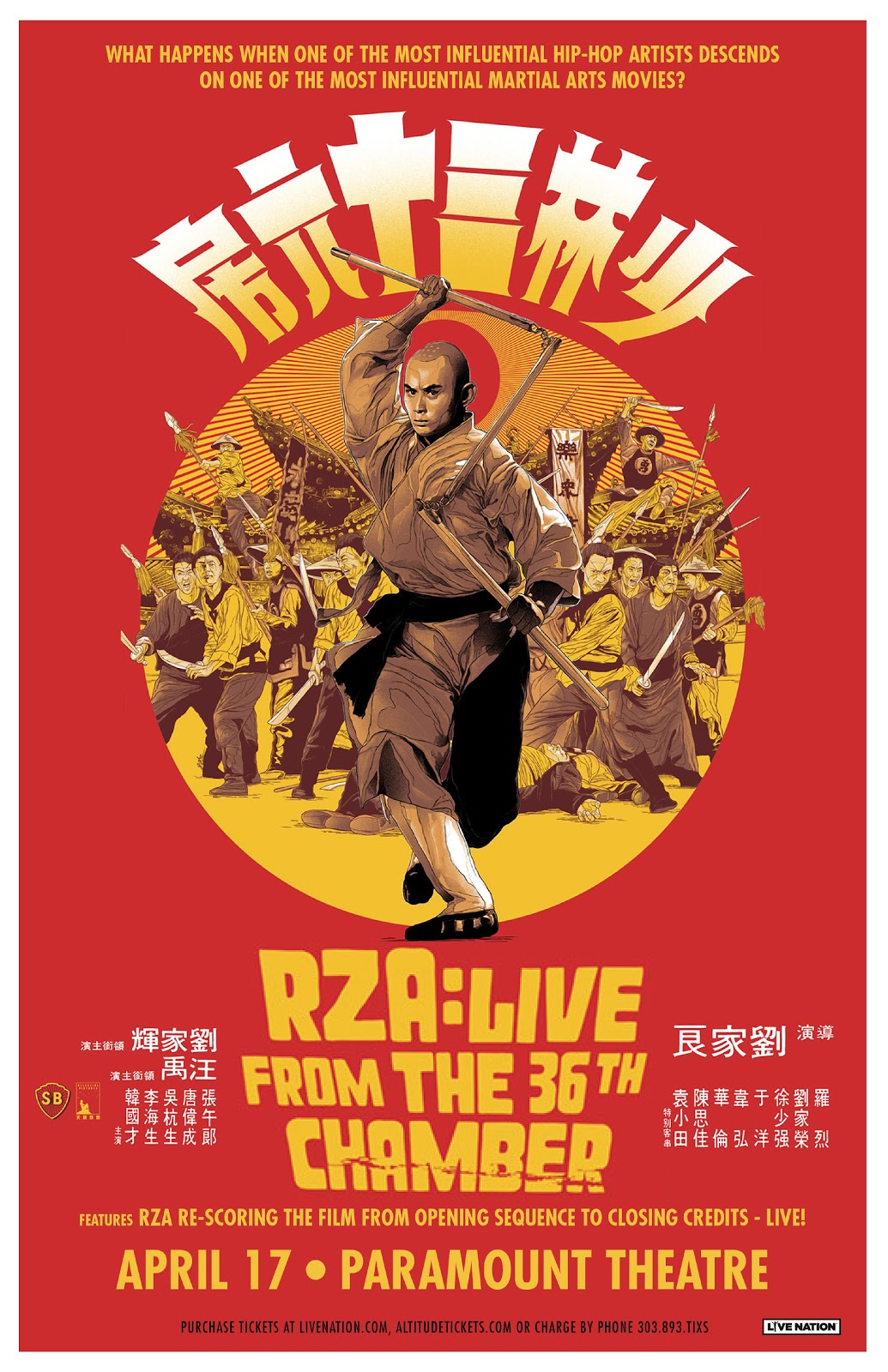 But anyone who’s listened to Enter the Wu-Tang knows there are 36 chambers. Once he masters all 35, Yude — known now as San Te — insists on creating a 36th chamber in which the pupil returns to the people to spread the ways of kung fu, that they may defend themselves and overcome their oppressors. He challenges the Shaolin to greater action.

RZA used to ditch school with his cousin, a young Ol’ Dirty Bastard, to watch kung fu movies at a theater in Staten Island. He saw parallels to his own story as a minority in the U.S., encased in oppression enforced by a regime that stifled all attempted revolts. In San Te he saw the determination, discipline, and fearlessness necessary to break free of those confines. He, ODB, and another cousin, young GZA, drew parallels between kung fu and their other love: Rap. Like the film’s kung fu masters who used swords, knives, and — for San Te — a three-sectional staff to meet their “sword style,” RZA and the Clan developed rapping styles forged through unique identity yet united around a common flow. (Had anyone rapped/sang before ODB?)

The Wu-Tang way became that of training, discipline and focus through the 36 chambers. On the album Enter the Wu-Tang, U-God raps, “My hip hop will rock and shock the nation/Like the Emancipation Proclamation.” Seeking self-realization through rap, they honored the 36th chamber, intent upon liberating listeners “with drastic rap-tactics.”

But these elements of RZA’s show weren’t given on the surface. His score was so subtle and enmeshed in the film’s action (which included several unbelievably badass fight scenes) it was easy to forget the score was there. Yet even when I lost the score, the beats resonated unconsciously, and I envisioned a few poor black kids collecting change to watch and rewatch this kung fu movie with hilarious English dubs, their leader finding inspiration that would lead him through albums and production tables and film scores and acting and directing to this stage right now, where he stood like a phantom guru in the corner.

And RZA’s beats made the film so cool. I pictured those black kids practicing kung fu on the sidewalk to look like their idol San Te — the “Master Killer.” I saw the path of discipline that resulted, the focus necessary to bring together nine guys of distinct styles and center them on an ideology of self-realization. The film revealed that Wu-Tang wasn’t just a band, but a way of life.

Apart from the bro bringing unwarranted ruckus, the crowd was digging every second. They laughed at absurd dubs and cheered at triumphant Chambers passed. One test had San Te leaping over water like Morpheus over buildings. I realized Morpheus actually leapt like him. (Kung fu films were a primary influence on The Matrix.) As with The Matrix, The 36th Chamber of Shaolin is a story of human potential to overcome oppressive evil. And the moral question of The 36th Chamber lies at the heart of two recent massive-money-makers, The Last Jedi and Black Panther: If a select few possess power capable of ending suffering at the hands of evil, can they morally refrain from action? Each film has the same answer: No.

Yet instead of laser swords and a mineral called Vibranium, San Te lifts the oppression through kung fu, a true human discipline, a path of humility, power, and justice. It’s attainable, and it’s real. And it’s not bogged down in Western blockbuster “mercy rule” ethics. Though these masters don’t seek to kill, they don’t hesitate to deliver a “sharp sword to the midsection” when the moment calls. Some men are so evil they deserve death.

After the movie, RZA spoke to the crowd. Adulating the film that changed his life, he reminded us its themes are as relevant today as they were in 1978, and the path of self-realization is ongoing, and we must act with discipline and courage to fight for truth and justice. RZA’s show reminded us that regardless of the degree of oppression, something intensely personal and powerful cannot be taken: Expression. The true self. Action for a higher good. His beats translated the film’s mythology into his own mythology, a mythology that will surely live on beyond any drunk bro too dumb to read about the show he’s going to see.

Before he left, RZA grabbed the mic and cried, “Up from the thirty-six CHAMBERS!” We gave him a standing ovation. Thanking Denver, RZA vanished behind the curtain, and we were left to ponder how to better walk our paths and manifest our own thirty-sixth chamber. Wu-Tang forever.