Some of the better casino advertisements

Some of the better casino advertisements

Ads can be quite boring and repetitive. They are one of the reasons why online streaming is winning against cable TV. But there are one species of ads that are guaranteed to be anything but boring – UK online casino & gambling ads.

With that unique British sense of humor, laden with a heavy dose of sarcasm, often delivered with deadpan seriousness, these ads were a joy to watch. But if UK politicians get their way these ads could soon become history.

Putting out a UK Casino ad is getting harder each year

Casino and sports betting ads were legalized in the UK in 2007 as a result of the Gambling Act 2005. While there has been an explosion in casino and betting ads since that year (over 600% growth in just 6 years), it has also resulted in a steady increase in laws and rules on the topic.

In the UK, casino ads are regulated by the Advertising Standards Authority. They have incredibly strict dos and don’ts for gambling ads. Here are some examples of what you cannot show in a casino ad:

As you can see, it is quite amazing that anyone can still create entertaining casino ads that comply with all these restrictions! Yet many gambling companies have done exactly that, creating some of the wackiest ads for the best UK online casinos, such as these listed here.

But with COVID-19, interest in online gambling has spiked considerably. Even in the best of times, there will be folks who get in trouble with problem gambling and addiction. In the time of unemployment and economic slowdown, there is a real risk that more people could go down that road in the UK. This is why many politicians are calling for a total ban on UK casino ads.

For its part, the gambling industry has voluntarily removed all ads for online casinos and bingo during the lockdown period in the UK. Will that be enough to prevent a total ban on such ads. Only time will tell. In the meantime, check out these fun TV ads:

Launched in 2017, PlayOJO is a UK-focused casino with an emphasis on “fair gaming.” They try to highlight the fairness aspect in this quirky ad that does not feature any humans at all. Instead, an Alpaca is the star of the show here.

The South American beast, a close relative of the llama, is shown having a hard time playing at unfair online casinos. It is shown dirty, wet, and depressed, out on a rainy day in a muddy field. All that changes once he finds PlayOJO Casino.

The now happy and clean white alpaca is shown dancing and strutting on a sunny day. It has a PlayOJO logo on its rump, and even winks at the camera before trying a hand (hoof?) at mobile slots. All in all, this is one of the cutest and quirkiest ads for an online casino ever!

The Special One - Paddy Power

When it comes to making funny gambling ads, Paddy Power is in a league of its own. While most of its infamous ads are related to sports betting there are a few about its online casino as well. And this one involves none other than Jose Mourinho himself.

Would you trust him?

The great part about this advert is that it has Mourinho poking fun at himself. Almost the entirety of the spot is used in setting him up for a big fall. We see Mou harping on about his status as the “Special One” – his performance at all his clubs, including a tongue in cheek reference to his stint at Manchester United, which was anything but special.

Be it while getting mail or ordering at a restaurant, everything he gets is “special.” It all ends when Jose gets into a cab and wins a daily jackpot playing at Paddy Power on mobile. The cab driver brings him crashing down to earth, saying that someone wins that every day! This ad deserves an award just for getting Mou to poke fun at himself.

What do you get when you bring Troy Verner (Mini-Me from Austin Powers), millionaire gambler Dan Bilzerian, a gorilla, and a smoking hot chick to a blackjack table? This is the question that the BGO ad tries to answer! 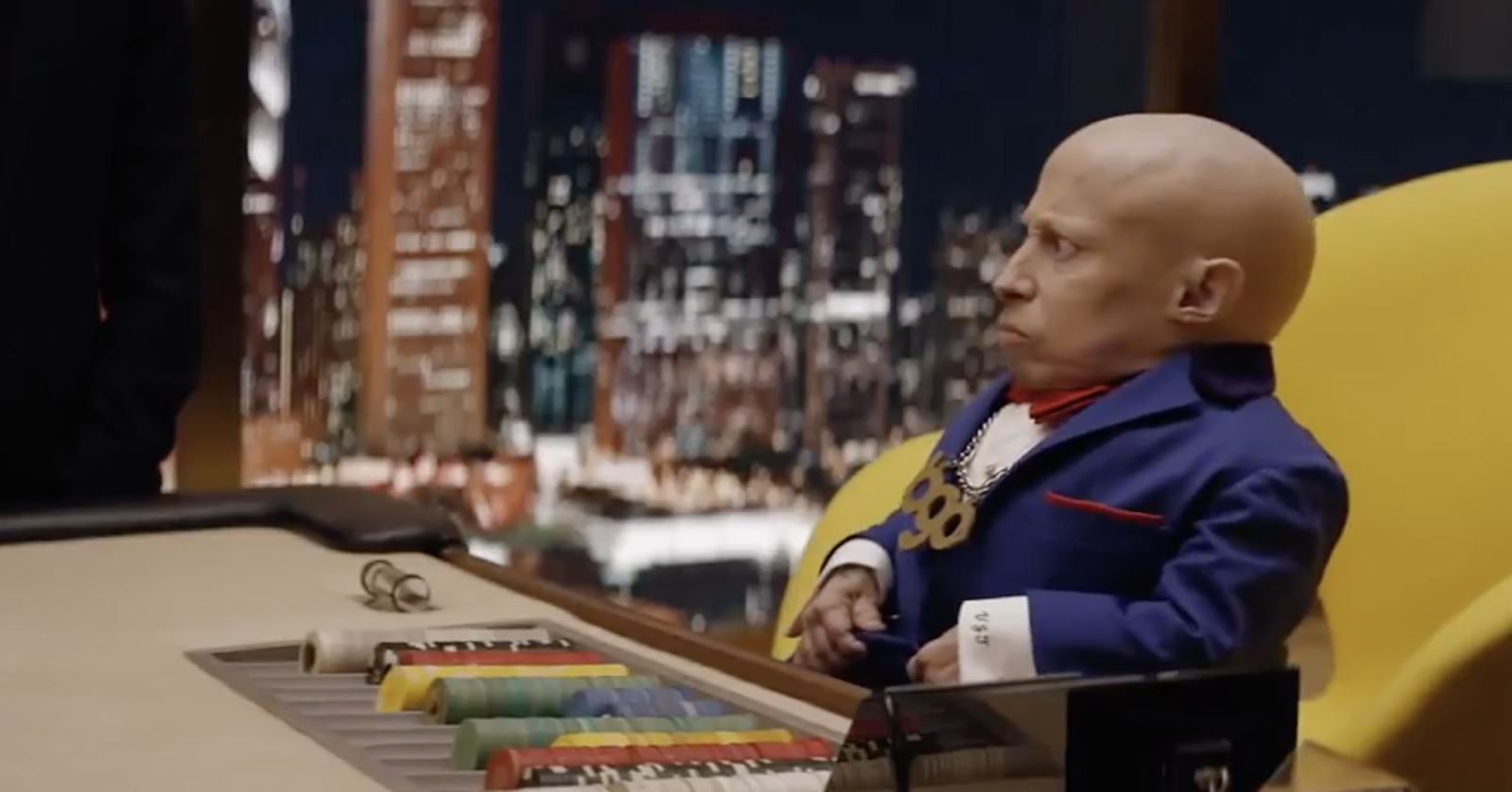 The late Troy Verner plays the evil casino boss with gusto here. The three others are challengers visiting the casino to “beat the boss” himself. This is a high stakes game of blackjack, with the winner getting huge gold bars.

Despite drawing a King and a Nine, Bilzerian boldly chooses to “hit”, asking for a third card. The Boss is happy because he thinks the win is his. But that high-risk move pays off as Bilzerian gets a Two, moving him to 21 for the win. With its over–the-top premise and a star turn from the great Verner, this is a fun casino ad.

Others worth an honorable mention include….

Virgin Casino went for a quirky pitch with their ad about a centuries-old vampire working as a supermarket cashier who gets in trouble while packing garlic. The drudge of his daily existence is broken when gets to play Virgin Casino on mobile and hooking up with old ladies he meets during his job!

Foxy Casino roped in Heather Graham for several ads featuring their famous Fox mascot. Turns out, the face hidden behind that fox mask is none other than the very sexy Ms. Graham herself! Casumo Casino had a short animated ad showcasing a runaway snowball that swallows everything in its path - just like their daily bonus that promised “all sorts of prizes.”