As the Drug War dies down, private know-how is pairing with government programs to create small-scale Marshall Projects to repair some of the damage. A case study can be found in Oakland, with a Black entrepreneur, weed delivery company Eaze and a social-justice-directed investment fund, Ultranative.

Oakland is one of a few cities with a cannabis social equity program, which gives licensing priority to local residents most likely to have been affected by the War on Drugs. First-time entrepreneurs Raeven Duckett, Demetrius Robinson, and Melikaya White, for example, co-created a delivery service in the East Bay, and received one of the first licenses to operate from the state of California.

The license opened a new world to Duckett. But new businesses need more than licenses. Here is where cannabis companies with expertise can step up.

Duckett was mentored by Ford Smith. His fund, Ultranative, aims at reducing human suffering by changing social institutions, and is heavily investing in several cutting-edge technologies in healthcare tech, hemp, crypto, and psychedelics. Ultranative invested early in Eaze, seeded Momentum with its first check, and continues to participate on the advisory board.

"Historically, communities of color have been most heavily affected by the war on drugs," Smith says. "Momentum gives us the opportunity to put entrepreneurs from those communities on an equal playing field and help accelerate them into this fast growing market."

Raeven Duckett is third generation Oakland. Raeven, like much of Oakland, flourished along with the tech boom. With a job at Pandora, she was "living the dream," doing yoga, using cannabis, and running half-marathons.

But the tech boom left much of old Oakland behind. By 2015, only a sliver of big tech company workers were Latin or Black, like Raeven. Meanwhile White and Asian millionaires were gentrifying Oakland. Today, houses sell for millions, and that old corner store is a market selling hipsters fresh fruit.

When weed was legalized in 2016, there was hope this new mega-industry would be more diverse. After all, Black and Latin folks disproportionately supplied the country medicine during a half-century of prohibition, and paid dearly with their freedom. But legal cannabis is almost as White as any other industry. A 2017 survey of cannabis company owners and stakeholders found only 4 percent were Black. Systemic racism and lack of access to capital were blamed.

Progress is being made: from Illinois to New Jersey, weed-legal states are drafting regulations that seed new businesses owned by communities trampled by the Drug War.

Old-school communities often understand cannabis markets best. Ducket knew weed buyers were used to texting their dealers, rather than using a complicated web platform. Customers appreciate the ease. They connect naturally via text. And any business is only as strong as the connections it forms. So Duckett's sales were outstanding. But on Duckett's end, all the texting was laborious. Lots of time on text.

Duckett's Momentum mentor, Smith, stepped in to help. Smith comes from generations of successful Texas business folks; his dad runs an oil and gas company. Smith did not follow his dad into petroleum. Instead, Smith took his resources and his passion for wellness and began investing in cannabis, including Harborside in Oakland, run by pioneer Steve DeAngelo. Smith realizes he's been lucky that, as a young businessman, he always knew where to turn for advice or references: his father, his father’s network and mentors like Tom Pickens, Son of the late Texas oil tycoon, T. Boone Pickens. "Advice is sometimes more impactful than money," Smith says.

"Access to a strong group of mentors influences my deep passion and interest in supporting programs like momentum," Smith says. "My goal is to scale this type of model into additional markets."

The cannabis business has a deep history, but is relatively new to interfacing with the above-ground world of business plans, taxes and corporate structures. So Smith lent his ear to Duckett.

Smith heard that Duckett has a great connection to her community, and to weed history. For instance, she called her delivery team Vipers — a viper is what weed sellers were called in the '20s and '30s, because people who smoked hissed. Smith loved that detail.

"Ford is great," Duckett says. "He really took the time to really understand what I wanted and what I was building, and I really enjoyed his feedback."

Smith comprehended where Duckett's bottleneck was — she could only text so fast. "Texting with a human supported backend doesn't scale," Smith says. And so he introduced Duckett to tech developers from one of his portfolio companies, Chroma Signet. Within a month and a half, they'd automated parts of her texting service so a bot can answer simple questions. Plus, they built a system to keep track of customer's preferences. Starting at Duckett's site mae.delivery, Oaklanders can still basically text to get weed, but it's faster and more efficient. Duckett is now looking at expanding into new legal markets.

Smith was gratified to see his money and consulting get Duckett ahead. "Personally, spiritually, it's been the most impactful money we've ever invested." Smith says. Smith says his time as a mentor taught him how important it is to support communities like old-school Oakland. "It all comes back to cultivating a strong community and giving entrepreneurs access to resources," Smith says. "Smart people thinking through a business." Smith will be mentoring another person this year.

For Duckett, the new, simpler texting platform has allowed her to speed up her work, keep better track of the data and own her own audience, rather than relying on a third-party service for deliveries. She can build profiles of customers and find out, for example, what kind of cannabis products Black women are likely to go for, so she can take care of them. A Black-owned small business like Duckett's is a glittering example of what can be done when public programs pair with private resources.

"I don't think I would have been able to build this technology without Momentum," Duckett says. The help is ongoing. "I needed an accountant last week and they helped me find one the same day. Those connections are, I think, the most valuable part."

Eaze goes out of its way to feature social equity brands and those owned by women.

"I don't think I would have been able to build this technology without Momentum," Duckett says. The help is ongoing. "I needed an accountant last week and they helped me find one the same day. Those connections are, I think, the most valuable part."

Duckett's business is doing so well she's struggling to keep up with demand. She's balancing caring for a fourth generation Oaklander, her baby son, Rex. And she hopes industries, not just cannabis, accelerate their efforts to be more inclusive and open.

"I want Oakland to be for my son what it was for me," Duckett says, "which is a place where I felt that I could do whatever I decided I wanted to do." 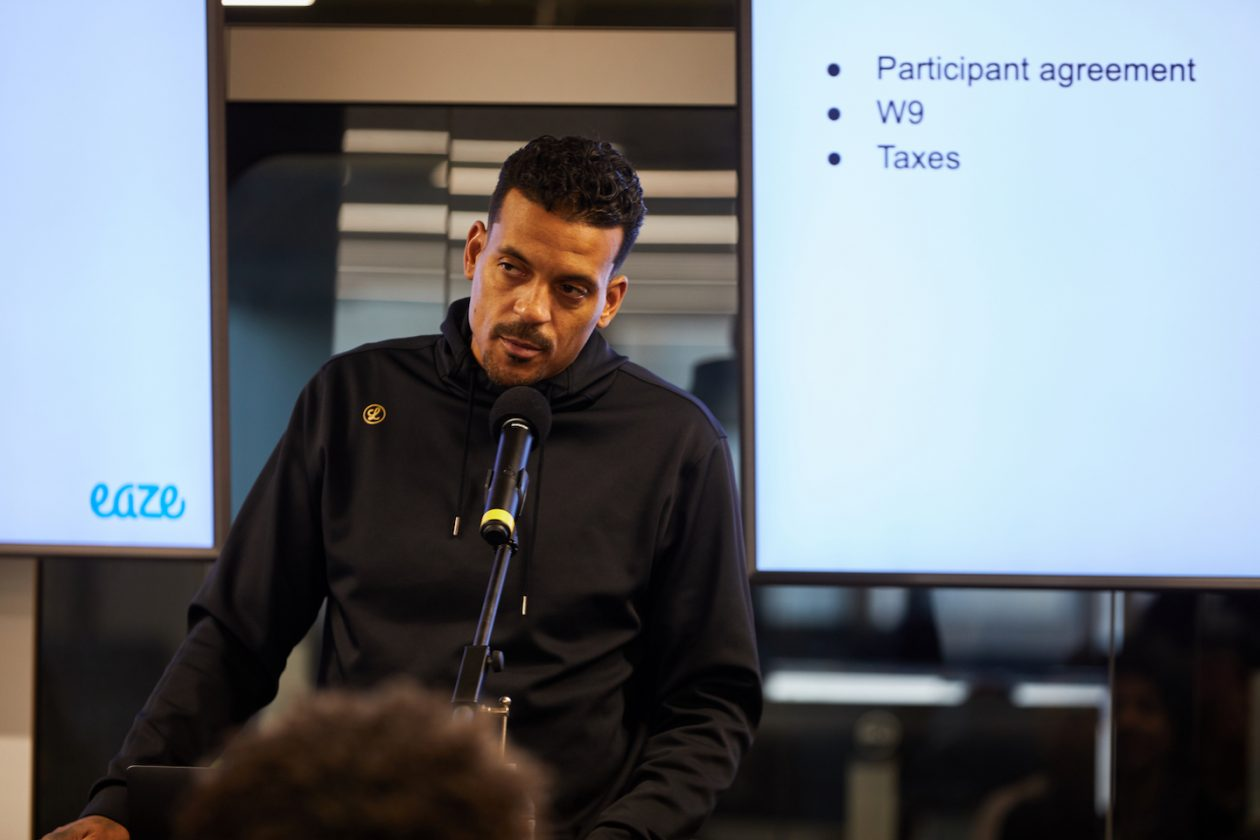